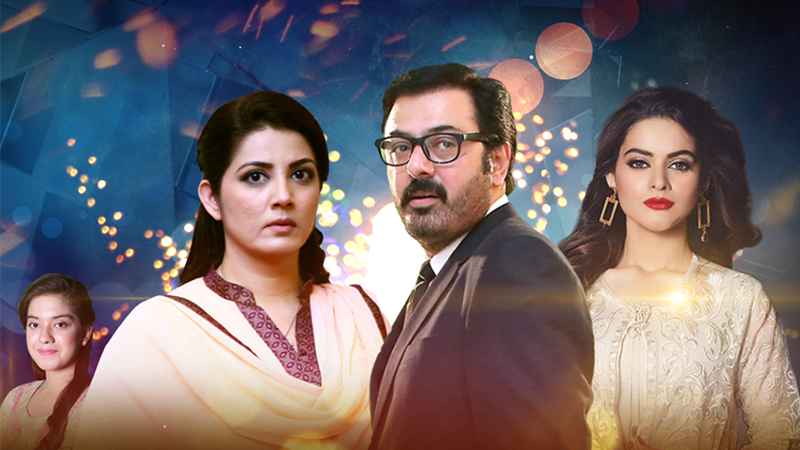 The drama serial was aired on Geo Television Network and it stars Nouman Ijaz and Sawera Nadeem after 6 years.

Sawera Nadeem had made her come back to television screens after 6 years in this drama. The drama was based on Mid Life crisis. A midlife crisis is a transition of identity and self-confidence that can occur in middle-aged individuals, typically 45–64 years old. The phenomenon is described as a psychological crisis brought about by events that highlight a person’s growing age, inevitable mortality, and possibly shortcomings of accomplishments in life. This may produce feelings of depression, remorse, and anxiety, or the desire to achieve youthfulness or make drastic changes to their current lifestyle.

The term was coined by Elliott Jaques in 1965. More modern research has shown this is not a phase that most middle-aged people actually experience, and some have questioned the existence of this phenomenon.

When it does occur, a midlife crisis is not typically actually experienced during the midpoint of one’s life, which for most average human lifespans would be around the age of 40.

academic research since the 1980s rejects the notion of mid-life crisis as a phase that most adults go through. Personality type and a history of psychological crises are believed to predispose some people to this “traditional” midlife crisis. People going through this suffer a variety of symptoms and exhibit a disparate range of behaviors.

It is important to understand the difference between a mid-life crisis and a mid-life stressor. Mid-life is the time from years 45–64. Where a person is often evaluating his or her own life. However, many mid-life stressors are often labeled as a mid-life crisis. Day-to-day stressors are likely to add up and be thought of as a crisis, but in reality, it is simply an “overload”. Both women and men often experience multiple stressors because of their simultaneous roles as spouses, parents, employees, children, etc.

Many middle-aged adults experience major life events that can cause a period of psychological stress or depression, such as the death of a loved one, or a career setback.

However, those events could have happened earlier or later in life, making them a “crisis,” but not necessarily a mid-life one. In the same study, 15% of middle-aged adults experienced this type of midlife turmoil. Being of lower educational status is related to feeling stressors to a greater degree than those of a higher education level during midlife. Studies indicate that some cultures may be more sensitive to this phenomenon than others; one study found that there is little evidence that people undergo midlife crises in Japanese and Indian cultures, raising the question of whether a mid-life crisis is mainly a cultural construct. The authors hypothesized that the “culture of youth” in Western societies accounts for the popularity of the mid-life crisis concept there.

Researchers have found that mid-life is often a time for reflection and reassessment, but this is not always accompanied by the psychological upheaval popularly associated with “mid-life crisis.” Those who made careers or jobs changes early in life were less likely to experience a crisis in midlife.

A mid-life crisis can affect men and women differently because their stressors differ. An American cultural stereotype of a man going through a midlife crisis may include the purchase of a luxury item such as an exotic car or seeking intimacy with a younger woman. Some men seek younger women who are able to procreate, not necessarily with an intention to produce offspring. A man’s midlife crises are more likely to be caused by work issues, a woman’s crisis by personal evaluations of their roles. Even though there are differences between why men and women go through a midlife crisis, the emotions they both encounter can be intense.

One of the main characteristics of a mid-life crisis perspective is one assumes that their mid-life is about to be eventful, usually in a negative way, and potentially stressful. Psychologist Oliver Robinson’s research characterizes each decade of life by describing frequent occurrences or situations particular to those age periods. He describes that a crisis can begin in a person’s early 20s when they usually try to map out their whole life. Moreover, the later age period, between 50 and 60, maybe a time of illness or even the thought of death. Such a deadline may convince a middle-aged person that their life needs to be lived as expected. Individuals experiencing a mid-life crisis may feel:

❖ a deep sense of remorse for goals not accomplished

❖ longing to achieve a feeling of youthfulness

❖ need to spend more time alone or with certain peers

❖ a heightened sense of their sexuality or lack thereof

❖ ennui, confusion, resentment or anger due to their discontent with their marital, work, health, economic, or social status